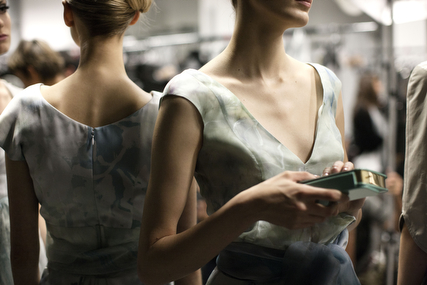 Whether this is an absurd evocation, an intellectual exercise, or an astute reflection I’m not calling it. I can’t. But the idea of taking an individual photographer who has shot both war and fashion and juxtaposing images from the two bodies of work, was curious and very disturbing. At one end, sure, there’s the composition and technique – brilliantly and noticably similar…at the other end of the spectrum is the danger of belittling such a weighty topic as war with such a flippant topic as fashion. All in all, plenty of tension, which is why I thought this a worthy share.

I still don’t know what to think. Generally speaking its not a surprise that popular reactions worldwide to this piece have been swift and, dare I say it, overwhelmingly unflattering. Basu has been quick to defend herself by explaining:

We are not comparing war to fashion. We are comparing the photos that come from those disparate circumstances.

But can you compare the photos taken of disparate circumstances without comparing the circumstances themselves? It’s a big stretch to take for the sake of alliteration. Just as Basu took the scales to the two forms of photography, we should take them to her project. On the one hand, I understand the goal of juxtaposition for being evocative. Whether bravery or naiveté, it takes a large dose of both in large doses to dive right into the deep end, which is what she did.

This project will always be an invitation for serious criticism and judgment. Write what words you may write around the images, but sitting an image of American soldiers at the same table as runway models with the title “War & Fashion” at the head is a guaranteed poke with a sharp stick for many. Even for those opposed to war (or fashion for that matter).

I wrote about wartime photojournalists a few weeks ago in part to celebrate the individuals who took the photos but also to appreciate the work itself. Although I threw up a sequence of shots, each photo really deserves to stand on its own — such is the emotional impact they have. It’s hard to imagine comparing say, Eddie Adams’ iconic Vietnam photo to a model having her makeup put on.

[If this topic is unsettling to begin with, please don’t scroll down to look at the photos. And please no ranting. Opinion yes, thrashing, no. This is intended/shared with the goal of critical reflection and respectful discussion only.]