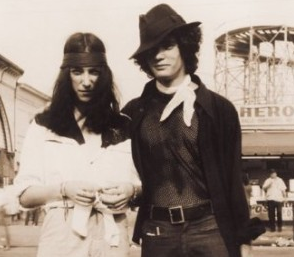 Inspiration can come from anywhere, and books have always been a great source for me. But so many of the books that are recommended in creative circles are solely how-to. How to be more creative, how to be less afraid, how to make the business or career of your dreams, etc. If put in balance with other reading this can be great, important stuff. But it’s not a magic bullet and their normally not prescribed in balance with other stuff to get the juices flowing. That’s why I whipped together this list of 10 books to charge the creative mind. Some non fiction, some fiction, some heady, some straight forward. There should be something for everyone… Amazon affil links to all the books are below, along with the Amazon blurb. Please spread the word – a more creative world is a better world.

It was the summer Coltrane died, the summer of love and riots, and the summer when a chance encounter in Brooklyn led two young people on a path of art, devotion, and initiation. Patti Smith would evolve as a poet and performer, and Robert Mapplethorpe would direct his highly provocative style toward photography. Bound in innocence and enthusiasm, they traversed the city from Coney Island to Forty-second Street, and eventually to the celebrated round table of Max’s Kansas City, where the Andy Warhol contingent held court. In 1969, the pair set up camp at the Hotel Chelsea and soon entered a community of the famous and infamous—the influential artists of the day and the colorful fringe. It was a time of heightened awareness, when the worlds of poetry, rock and roll, art, and sexual politics were colliding and exploding. In this milieu, two kids made a pact to take care of each other. Scrappy, romantic, committed to create, and fueled by their mutual dreams and drives, they would prod and provide for one another during the hungry years. Just Kids begins as a love story and ends as an elegy. It serves as a salute to New York City during the late sixties and seventies and to its rich and poor, its hustlers and hellions. A true fable, it is a portrait of two young artists’ ascent, a prelude to fame. [BTW, I noticed Patti Smith’s Just Kids won the national book award.]

Here, in one volume: Marjane Satrapi’s best-selling, internationally acclaimed memoir-in-comic-strips. Persepolis is the story of Satrapi’s unforgettable childhood and coming of age within a large and loving family in Tehran during the Islamic Revolution; of the contradictions between private life and public life in a country plagued by political upheaval; of her high school years in Vienna facing the trials of adolescence far from her family; of her homecoming–both sweet and terrible; and, finally, of her self-imposed exile from her beloved homeland. It is the chronicle of a girlhood and adolescence at once outrageous and familiar, a young life entwined with the history of her country yet filled with the universal trials and joys of growing up. Edgy, searingly observant, and candid, often heartbreaking but threaded throughout with raw humor and hard-earned wisdom–Persepolis is a stunning work from one of the most highly regarded, singularly talented graphic artists at work today.

My Stroke of Insight

On the morning of December 10, 1996, Jill Bolte Taylor, a thirty-seven-year-old Harvard-trained brain scientist, experienced a massive stroke when a blood vessel exploded in the left side of her brain. A neuroanatomist by profession, she observed her own mind completely deteriorate to the point that she could not walk, talk, read, write, or recall any of her life, all within the space of four brief hours. As the damaged left side of her brain–the rational, grounded, detail- and time-oriented side–swung in and out of function, Taylor alternated between two distinct and opposite realties: the euphoric nirvana of the intuitive and kinesthetic right brain, in which she felt a sense of complete well-being and peace; and the logical, sequential left brain, which recognized Jill was having a stroke, and enabled her to seek help before she was lost completely. In My Stroke of Insight, Taylor shares her unique perspective on the brain and its capacity for recovery, and the sense of omniscient understanding she gained from this unusual and inspiring voyage out of the abyss of a wounded brain.

The Diving Bell and the Butterfly

In 1995, Jean-Dominique Bauby was the editor-in-chief of French Elle, the father of two young children, a 44-year-old man known and loved for his wit, his style, and his impassioned approach to life. By the end of the year he was also the victim of a rare kind of stroke to the brainstem. After 20 days in a coma, Bauby awoke into a body which had all but stopped working: only his left eye functioned, allowing him to see and, by blinking it, to make clear that his mind was unimpaired. Almost miraculously, he was soon able to express himself in the richest detail: dictating a word at a time, blinking to select each letter as the alphabet was recited to him slowly, over and over again. In the same way, he was able eventually to compose this extraordinary book.

Art & Fear: Observations On the Perils (and Rewards) of Artmaking

Art & Fear explores the way art gets made, the reasons it often doesn’t get made, and the nature of the difficulties that cause so many artists to give up along the way. The book’s co-authors, David Bayles and Ted Orland, are themselves both working artists, grappling daily with the problems of making art in the real world. Their insights and observations, drawn from personal experience, provide an incisive view into the world of art as it is experienced by artmakers themselves. This is not your typical self-help book. This is a book written by artists, for artists -— it’s about what it feels like when artists sit down at their easel or keyboard, in their studio or performance space, trying to do the work they need to do. Art & Fear has attracted a remarkably diverse audience, ranging from beginning to accomplished artists in every medium, and including an exceptional concentration among students and teachers.

This unforgettable memoir, by one of our most gifted writers, introduces us to the young Toby Wolff, by turns tough and vulnerable, crafty and bumbling, and ultimately winning. Separated by divorce from his father and brother, Toby and his mother are constantly on the move, yet they develop an extraordinarily close, almost telepathic relationship. As Toby fights for identity and self-respect against the unrelenting hostility of a new stepfather, his experiences are at once poignant and comical, and Wolff does a masterful job of re-creating the frustrations and cruelties of adolescence. His various schemes – running away to Alaska, forging checks, and stealing cars – lead eventually to an act of outrageous self-invention that releases him into a new world of possibility.

The Liars’ Club brought to vivid, indelible life Mary Karr’s hardscrabble Texas childhood. Cherry, her account of her adolescence, ‘continued to set the literary standard for making the personal universal’ (Entertainment Weekly). Now Lit follows the self-professed blackbelt sinner’s descent into the inferno of alcoholism and madness–and to her astonishing resurrection. Karr’s longing for a solid family seems secure when her marriage to a handsome, Shakespeare-quoting blueblood poet produces a son they adore. But she can’t outrun her apocalyptic past. She drinks herself into the same numbness that nearly devoured her charismatic but troubled mother, reaching the brink of suicide. A hair-raising stint in ‘The Mental Marriott,’ with an oddball tribe of gurus and saviors, awakens her to the possibility of joy and leads her to an unlikely faith. Not since Saint Augustine cried, ‘Give me chastity, Lord-but not yet!’ has a conversion story rung with such dark hilarity. Lit is about getting drunk and getting sober, becoming a mother by letting go of a mother, learning to write by learning to live. Written with Karr’s relentless honesty, unflinching self-scrutiny, and irreverent, lacerating humor, it is a truly electrifying story of how to grow up–as only Mary Karr can tell it.

An intimate look at writing, running, and the incredible way they intersect, from the incomparable, bestselling author Haruki Murakami.While simply training for New York City Marathon would be enough for most people, Haruki Murakami’s decided to write about it as well. The result is a beautiful memoir about his intertwined obsessions with running and writing, full of vivid memories and insights, including the eureka moment when he decided to become a writer. By turns funny and sobering, playful and philosophical, What I Talk About When I Talk About Running is rich and revelatory, both for fans of this masterful yet guardedly private writer and for the exploding population of athletes who find similar satisfaction in athletic pursuit.

A New York Times bestseller—the outrageous exploits of one of this century’s greatest scientific minds and a legendary American original. In this phenomenal national bestseller, the Nobel Prize­-winning physicist Richard P. Feynman recounts in his inimitable voice his adventures trading ideas on atomic physics with Einstein and Bohr and ideas on gambling with Nick the Greek, painting a naked female toreador, accompanying a ballet on his bongo drums and much else of an eyebrow-raising and hilarious nature. Black-and-white photographs throughout

Clean: The Revolutionary Program to Restore the Body’s Natural Ability to Heal Itself

We all need to get healthy. Clean is an M.D.’s program designed to be easily incorporated into our busy schedule while providing all the practical tools necessary to support and rejuvenate our bodies. The effect is transformative: nagging health problems will suddenly disappear, extra weight will drop away, and for the first time in our lives we will experience what it truly means to feel healthy.

If anyone has read the books above and feels like adding their 2 cents in review in the comments, much appreciated. Happy reading.

Never ‘Work’ Again — On Following Your Passion with Photographer Ian…