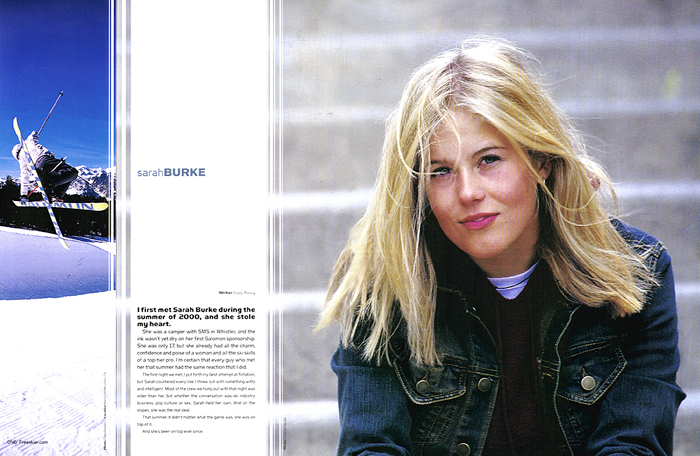 Update: January 19, 2013 It’s been a year since Sarah Burke left us. Thinking of her and all she gave to us in life on this day.

Sarah Burke would light up a room when she walked into it. Actually more than that, she lit up an entire sport, and was bound to light up the world in the forthcoming Olympics, before she succumbed to spine injuries sustained while training in Park City on January 10. She passed away yesterday. The world lost an amazing skier and a superstar human being.

I had the amazing opportunity to know and work with Sarah over the course of a decade. During that time I, along with so many others, had the insanely good fortune to watch her change the face of women’s skiing and simultaneously watch her inspire all those around her. The image gallery above is the tip of an iceberg of images I was able to capture of/with Sarah. This tribute isn’t her best work, or mine. It isn’t meant to be. It’s rather a humble historical look back – in some cases looking back more than 10 years – at her first Freeskier skiing cover, her first Smith Goggle ad, her practicing runs at the X-Games, and that amazing smile. Working with her was pure joy. And she will be missed dearly. RIP.

My manager, Christopher Jerard, knew her even better than I did, as he was the publisher of Freeskier and Snowboard Magazine for many years before coming to work at CJinc. Jerard and I got the news of her passing while we were together yesterday. He wrote these words below about Sarah that I think we can all live by. The theme is ‘step up’. Step up to the challenges in your life. Step up for your friends, step up because it’s human to do so….

I met Sarah when she was 16 years old shortly after I joined the staff of the brand new Freeskier magazine. She was already the “it” girl in freeskiing. Actually, in 1999 she was really the only girl in freeskiing. She was incredibly talented and fearless. And there was always that ever-present smile. She was shy early on -but before you knew it she was giving the editors at our magazine shots in the arm, still with that same great smile, and challenging us to get the shot, ski another run, or just have more fun. Her passion for skiing was evidenced by her athletic success – and her passion for life came through like the sun. She was a light for all of us. Just one of those people that is universally loved. For all of those who knew her only through the movies and photos – she was exactly as she seemed. Simply one of the best people you’ll ever meet. Pure love.

It’s impossible to deny, that by the time she was 20, she went from being a cute kid, to being simply drop-dead gorgeous. Suddenly she graduated from profiles in the ski industry standards Freeskier and Powder to being in Maxim, People and one FHM’s sexiest athletes alive. But she played it all off as no big deal with a humbleness rarely found at her level of success – an elegance and grace that was unique to her. And yet, even with all the beauty and the elegance, she was one of the toughest people Ive ever met. She once put me in a head lock. And I am not ashamed to admit I could not break out of it. And I tried. Hard. I think that memory would make her smile.

She could play with the boys. That is for sure. She had to for a lot of years in order to open up the sport for the women behind her. Her will and determination on and off the hill in this regard are legendary. Sarah was an innovator and a leader for women in skiing. Even as Sarah was an inspiration to so many people – but she was especially important for women athletes. She did more for the progression of woman’s freeskiing than any other single person – period. She was a founder of the Association of Freeskiing Professionals and was instrumental in helping to push the disciplines of skiing she loved, halfpipe and slopestyle skiing, into the Olympics for 2014. That will be a lasting part of her legacy forever.

She pushed her sport, her profession, to the next level. And even as she had to fight for women to be considered in competition with the men, when she took her hits, she always smiled through the bruise and the bang. Both on and off the hill. In 14 years of working with Sarah – I never saw her without a smile and a good word. Not once. Ever. No matter what. That smile on the podium, holding the X Games Gold four times? That was the same smile she would give 2 months later if you ran into her on the street in passing. So radiantly genuine.

Sarah will always be around us.Trennon Paynter, her coach and good friend to both Sarah and her husband Rory, sent a message out on twitter yesterday: “She’s in every snowflake, every ray of sunshine, every breeze. More than ever, now and always, #IBelieveInSarah.” She will always be there to remind us to “step up” and be better. No matter if it’s out skiing, at work, at the gym or remembering to smile and give your friend a hug. Do not hold back. Life is simply to precious and too much of a gift. Step up. Its such a powerful idea.

It was a dear friend of mine, Matt Harvey, the longtime Editor of Freeskier magazine, who reminded me of this playful challenge to step up that Sarah so often conveyed to her fans and those around her – with such obvious joy.

The news of Sarah’s passing hit in the middle of the work day and Matt was onstage hosting a Freeskier magazine sponsored event. He was a very close and personal friend of Sarah’s. To be in public and hurting, gutted with loss, was painful. But he remembered her words, “Step up.” She would tell him this, no matter if she was standing next to him on the hill taunting him to try a jump or rail slide or pushing him to go talk to the girl across the bar later that night – she was always nudging those around her to be better. And she led by example. So when it hurt and he wanted to hide – he smiled and remembered Sarah. He dug deep and stepped up. That’s what Sarah did when organizers told her that girls didn’t have a spot in competition and that’s what she did when she was battered from falls and that’s what she did when there was a line of little girls who wanted an autograph…hours after the last competition run of the day.
Sarah always stepped up. Always.

And that’s what we’re going to do to remember her. Step Up. Thanks Sarah. We will. And we’ll remember you’re smile when we do.

_____
UPDATE: Was just sent this beautiful video montage of Sarah being amazing. Worth the watch.

A Sarah Burke tribute video. from Downtofilm. on Vimeo.