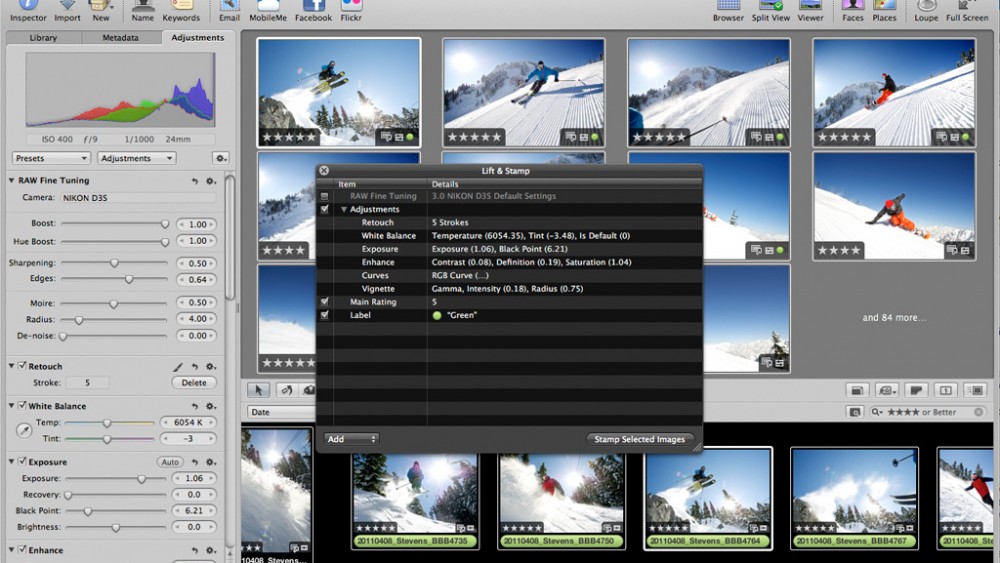 It’s been gratifying to see that the great preset debate from my earlier post is not isolated to this office, instead there seems to be a lot of interest in this topic and a fairly even split in favor of and against using adjustment presets.  The majority of comments landed somewhere in the neighborhood of “I use them in moderation in order to get initial settings or ideas, then custom tweak from there.”

This is not a bad place to be.  And yet, my presets sit to the side of my toolbar gathering dust 99% of the time.

Why?  I’m constantly amazed at the extent to which each and every photograph is an individual.  A small wiggle of the lights, camera, clouds, sun, model; any of it can change an image materially.  This doesn’t just apply to the technical values of the image, it also applies to the mood and aesthetic essence.

It is this aesthetic essence that I try to ‘read’ when I start post production on an image.  Does this feel like a dark or light image?  Is it punchy and loud, or quiet and subtle?  Does the color add value or create a distraction?  I find that the images have some capacity to direct me in my approach.

How does this ‘approach’ translate to real action?  Here are the steps with which I approach a new collection of images that come across my desk:

Lest this all be too simple, I should share two exceptions to this workflow.

Ongoing Projects.  Chase shot for almost three years to complete the Seattle 100 project.  By the second month of shooting we had perfected the shooting and retouching.  The lights were set up the exact same way each time we shot.  The camera settings were always the same.  The high contrast black and white aesthetic was established and fine tuned.  All we had to do was repeat until we had shot all 100 subjects.  In this instance we relied heavily on our custom preset during the initial broad retouch of images for the web.  The images that went in the book were each custom retouched in Photoshop.

Shooting Tethered.  Almost all of our tethered shooting sessions are set up for the benefit of the client or subject.  It’s a way to instantly share what’s being captured so that tweaks can be made to the shoot in real time.  While Chase and I are both able to envision what a RAW image can look like of with some post work, often the clients or subjects are not trained to do the same.  To this end, Chase and I will generally collaborate on a rough post production aesthetic at the same time we’re setting up the lighting and getting test shots at the beginning of the shoot.  We’ll then use Aperture’s ability to apply  presets while importing tethered shots.  That way, the images already look close to what we’re trying to achieve the second they show up on the monitor.  This makes the clients and talent happy.

The important takeaway is that each shoot is approached with a fresh set of tools.  Just as it’s often more effective to build a house from the ground up than to do a full remodel, I find that it’s more effective to invest more time on the front end of the post production process in order to generate a custom look tailored to the collection than it is to drop presets on the images, and then have to dig around to figure out what’s doing good and what’s doing harm.

If these methods makes sense for you, feel free to adopt them.  If you have developed a workflow that utilizes presets more heavily than ours, by all means, do your thing.  The true beauty of the proliferation of digital imaging technology is that it gives people an ever increasing set of tools for creative expression.  Heck, a couple months down the road you just might find me extolling the virtues of a great Aperture preset I just found online.  The only constant in this landscape is change.  Experiment, have fun, and make things that you find to be beautiful.