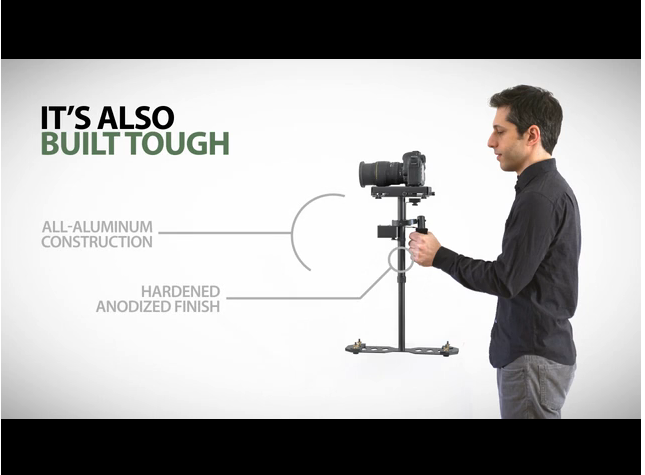 I’m loving the photo related projects that are popping up on kickstarter these days. I get 4-5 emails per week from people promoting their projects. Some of them suck. Some are fun. Others are downright dope. So, as we usher in a new era of DIY gadgetry and attempt to discover a future slew of products that might help us photogs + directors, I’m going to try to regularly recommend some kickstarters that have a little swagger. This week, I present, the Supraflux Video Camera Stabilizer with Brake.
—
You might have the eye of an auteur, but without smooth and stable footage your film is going to reek of amateurism.

The folks at Supraflux brought video stabilization to the masses with the geeky-but-effective Picosteady, a hand-held camera stabilizer. Back by customer demand for a heavier-duty stabilizer to accommodate larger cameras, Supraflux’s new Kickstarter campaign, introduces said larger stabilizer with a cool feature that they call the Brake.

The Brake is an electronic locking device that locks one axis of the stabilizer with the touch of the button, allowing for 2 free-floating axes and eliminating the need to touch the stabilizer with the free hand in order to turn the camera. (a problem we’ve noted on the expensive but pretty good Merlin Steadicam that we’ve owned for years.) So this is Supraflux’s solution. Haven’t tried the prototype myself, but they could be onto something.

Check it out here on Kickstarter campaign and donate!

We scored an interview with Nadim Elgarhy (one of the inventors):

CJ: What inspired the SupraFlux? Did you wake up at 3am out of a dream or was it a more iterated process?
Nadim: A few years ago I developed an interest for filmmaking. I quickly realized that it wasn’t that easy to get nice, smooth footage. So, I started exploring stabilization options: tripods with fluid heads, sliders, jibs, and of course, handheld stabilizers. The stabilizer got my interest the most because it doesn’t have the same limitations as the other devices do: it’s not limited to only one type of motion, it’s not limited in range, and it’s quite compact. The only problem is that it is much harder to operate and it’s not as easy to get decent footage with it as it is with other devices.

Last year my brother Karim, and I created a very small stabilizer (The Picosteady) that only works with small cameras, and that is very easy to setup and use. But it has it’s limitations, mainly that it can’t stabilize heavier cameras, like, for example, the very popular Canon 5D2. So, we started working on a bigger stabilizer. One day, while testing one of our prototypes and using our hands to control the direction of the camera, Karim just came up with the idea to have some sort of mechanism to lock the main shaft on-demand. We went through a couple of iterations before settling on the current design.

CJ: What makes the SupraFlux so innovative?
Nadim: The first stabilizer was invented in the 70’s and hasn’t seen any innovation since then. In more than 30 years it has always remained the same concept, and has always been operated with the same technique: using your fingers directly on the post to control the camera’s movement. The problem with that is that it requires a lot of experience to get a good results. What makes the Supraflux Stabilizer so innovative is that you no longer need to touch the post to control the direction. This removes the human-factor error, and it tremendously reduce the experience and skills required to get good footage from the Stabilizer.

CJ: You’ve already eclipsed your goal on Kickstarter – how many units are you hoping to make and when will you ship?
Nadim: We’re very grateful to all the backers so far! People are awesome! We’re hoping to reach 200 backers by the end of the campaign. We’re going to announce some stretch goals (bonuses and extra options that will be made available if we reach certain goals) very soon. We’re planning on having all Supraflux Stabilizers shipped by the end of August 2013.

CJ: Any other ideas up your sleeve you can give us a peek at?
Nadim: We’re working on a few things right now, mainly sliders and jibs. But we don’t want to come up with just another slider, or just another jib. We’re always looking to innovate, making things easier to operate and handle, making things more practical for the end-user, without ever compromising on quality. When we announce our next product, it will be something really cool!