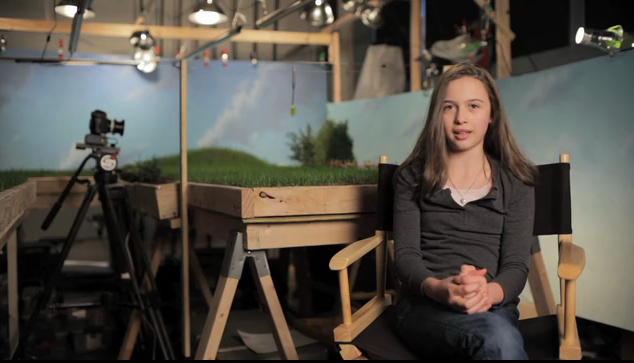 I don’t know what you were doing when you were 11, but I know I wasn’t directing movies. Hell, I wasn’t even standing in front of that pool. Trinity Anderson, on the other hand, has jumped into the deep end and seems to managing just fine, thank you.

The 11-year-old and her father, Barry Anderson, are wrapping up production on her latest stop-motion film (a genre she’s been at since she was 4) and have launched a Kickstarter campaign to help cover the rest of production costs. The film is titled Me & Ewe. It is a sheep love story.

I caught up with Trinity and Barry before her performance rehearsals (she’s also an actor) to talk a bit more about her project.

For the record, this is my first time interviewing an 11-year-old.

How did you get into movies and directing? How old were you and what drew you it?

Trinity: When i was 4, we went to Hawaii. I used to get up early, but where we were staying was right near a big cliff and my parents didn’t want me going outside on my own. So they got me a video camera to play with inside. I had Playmobils at the time and I used to make up stories and started using stop motion. I also really liked acting at a young age. When we go to California every summer I get to go to an Shakespeare acting camp. I’ve been doing that every year for a while now.

Trinity: We had a lot of problems with the main tree in the film. As filming went on, the tree started to shed its leaves, so by the end we sort of had this giant dead tree. You can kind of see it in the film, but as it goes on we show it less and less. In the first opening shot it’s green and lush. As you watch it, it kind of dies on you.

Our biggest breakthrough happened when we were shooting one shot and we ran out of battery. It was a long shot and we didn’t want to retake it. We were about to disassemble when we decided to see if we could recharge the battery while it was still attached to the camera. That worked, so we were able to continue.

Barry: It was a Switronix PB70 external battery. We couldn’t have plugged it in and saved the shot had we been using a regular canon battery.

So tell me, how has this project help you grow as a director? What’s it like being in charge of a project and managing other people?

Trinity: This project was bigger than all the other projects. I’ve made little stop motion films with friends using the iSight on the computer, but this one used real props, real cameras. It is much better quality and we’ve spent a lot more time at at and it’s being shot in an actual studio. We’re planning to enter it in film festivals and put it online. So it’s just bigger than anything I’ve done.

As far as managing, well, we don’t have many people working on the film. Besides my dad there’s my great uncle and grandpa. My dad and I do most of the animated work, and we also have one other animation guy who is doing the background sheep. I pretty much told him what to do and he did it.

Barry: We basically spent a lot of time finding people who would put up with us.

In many ways this project is co-directed by you and your Dad. What has that been like? Has it been challenging making sure the visions are aligned?

Trinity: We have limited amount of camera angles, so there isn’t much decision there. We decide on which camera angle would be best and worked together to figure out the placements. My Dad helped a lot  with the lights. But otherwise it was pretty straightforward as to which lens we should be using. I guess I was in charge of placement of sheets.

Barry: Trinity wanted to be lead animator. We spent some time talking through the story and came up with some rough storyboards. We figured out what the scenarios would be. Once we had the story down, we agreed on things. It wasn’t a major Hollywood production — there were some limitations and once things fell into place and we put on the lens we got dialed it in.

In the beginning I was tech guy at computer, making sure we weren’t going to fast to slow and Trinity was in charge of bringing the sheep to life on the screen. But once she got over her intimidation of the technology, she had no problem assuming that role, too!

Trinity: I always wanted to work in movies. For a short time I went through an archeology phase, but my Dad has always been directing movies, so really I’d have to say my Mom and Dad. Aside from them I really like Stephen Speilberg and his movies like Jaws, ET, Close Encounters of the Third Kind and Indiana Jones. I also like It’s a Wonderful Life and some other black and white films like, Maltese Falcon, The Navigator and Some Like it Hot.

I really enjoy comedy. Movies that aren’t funny aren’t my favorite. Buster Keaton has been an influence for me. I do some circus performance and he’s really made my comedy better.

Do you have a particular favorite stop motion director of film?

Trinity: Nightmare before Christmas. But I also really like A Town Called Panic. It’s a French film. It uses a real unique animation form. It’s different and it fits the story.

I also like the Fantastic Mr Fox. The models are good and I love the voices of the actors. Also the score is beautiful. Our test score is mostly taken from that movie. It was done by Alexandre Desplat [who did Argo]. We actually sent him an email to see if he’d do the score for our movie, but we haven’t heard anything yet.

Wow. Let’s hope he comes through. That would be something.

We have a lot of gear heads who read the blog. They’re going to want to know a little bit about the gear you use in the film.

Barry: For cameras we used two Canon 5D Mark II’s. We’re using Dragonframe software to do the actual animation. It’s been used in a lot of features. It’s powerful and not that expensive.

Trinity: It’s great because it’s not as complicated as some programs, but it’s not so simple that it can’t do all the things you want. It’s really the perfect medium. The other cool thing about the project is that most of the lighting is done with lights we got at Home Depot.

Barry: We used to 1K source lights with soft boxes, but every other light was a Home Depot light. We built a grid over the field and used everything from 15 watt up to 300 watt, both clear and frosted.

Trinity: And a lot of gaffe tape.

To help Trinity and Barry finish their project, contribute to the Kickstarter campaign, here.

Here are some behind-the-scenes stills from the set of Me & Ewe. Enjoy:

Tony Nader: What is the Meaning of Life?
4 Photo Technologies You Need to Know