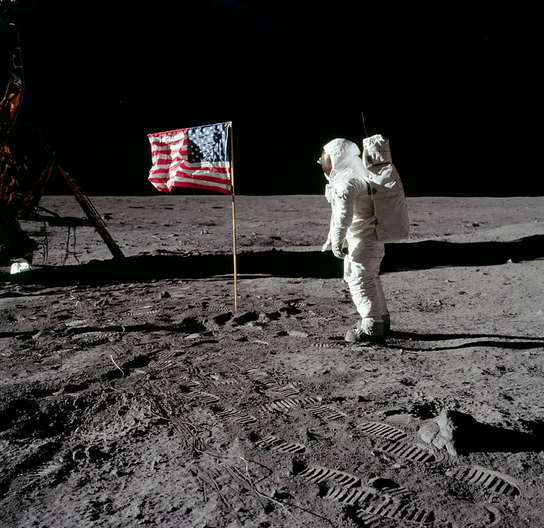 [First published shortly after Neil Armstong’s death in August 2012] Neil Armstrong passed this weekend. I was sad to hear the news that the man who spoke those immortal words that inspired the world: “It’s a small step for [a] man, a giant leap for mankind,” had left us.

He was a hero to many. President Obama said of his passing, “Neil Armstrong was a hero not just of his time, but of all time. Thank you, Neil, for showing us the power of one small step.” His work inspired millions, not only with his famous landing on the moon, but with the photos he took while there. Click through some of the image tabs above to see some of Armstrong’s photos from the surface of the moon. Many are from a Life magazine feature that ran after the lunar landing.

As the primary photographer of that first successful manned lunar mission in 1969, Neil Armstrong, was responsible for some of the most iconic images of the modern age. As the photographer, contrary to popoular belief, Armstrong did not actually appear in many of the famous photos he took on the moon. Most of the iconic images we know of today – are of his lunar romping partner Buzz Aldrin. There is one well-known shot of him climbing into the Lunar Module “Eagle.” It was Armstrong who uttered the famous, “…the Eagle has landed,” to Houston when they touched down in the Sea of Tranquility on the moon’s surface.

The two men had special modified 70mm Hasselblad 500EL. According to Hasselblad, “This is a specially designed version of the motorized 500EL intended for use on the surface of the moon, where the first lunar pictures were taken on 20 July 1969 by Neil Armstrong. The camera is equipped with a specially designed Biogon lens with a focal length of 60 mm, with a polarization filter mounted on the lens. A glass plate (Reseau-Plate), provided with reference crosses which are recorded on the film during exposure, is in contact with the film, and these crosses can be seen on all the pictures taken on the moon from 1969 to 1972. The 12 HEDC cameras used on the surface of the moon were left there. Only the film magazines were brought back. They also had two 16mm data acquisition cameras and one 35mm close-up stereoscopic camera. Altogether, they took 232 color and 107 black and white photographs on the surface of the moon.”

As I read about Armstrong this weekend I grew to admire him even more. He was, in addition to being the first man to step foot on the moon, a brilliant engineer and a fearless test pilot. Neil Armstrong went to the moon first as an explorer for mankind, second as a scientist and engineer – but with intention or not – he came back a famous photographer. Here’s an inspirational quote that I think applies uniquely to creatives – about the uncertainties of success.

“The unknowns were rampant. There were just a thousand things to worry about.”

He was, of course, talking about landing a small flying man-made pod on the moon…without knowing or having tested if it could do so. And even more concerning – if it could take OFF again. Mind-blowing. But we’ve all felt that way about something. It puts things in perspective on what is possible.

This statement from Armstrong’s family is wonderful and the best way to honor him.
“While we mourn the loss of a very good man, we also celebrate his remarkable life and hope that it serves as an example to young people around the world to work hard to make their dreams come true, to be willing to explore and push the limits, and to selflessly serve a cause greater than themselves.

For those who may ask what they can do to honor Neil, we have a simple request. Honor his example of service, accomplishment and modesty, and the next time you walk outside on a clear night and see the moon smiling down at you, think of Neil Armstrong and give him a wink.”