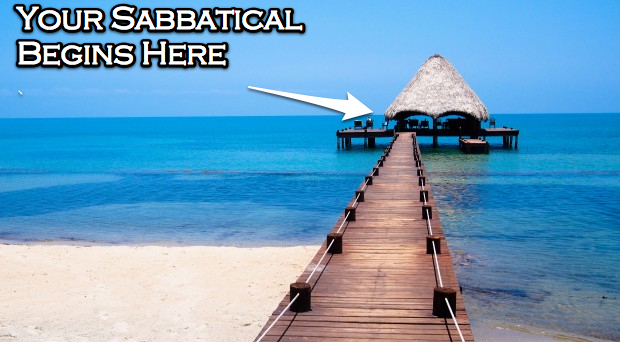 How To Reboot, Refresh & Refocus Your Creativity — The Fine Art of the Sabbatical

Many of us have …ahem…fantasies about shutting down the laptop and closing up the studio for an extended period to go try something different. Pick up horseback riding. Learn a new language. Fly a plane. We all know our creative souls need it, but making the move is frightening. A couple months ago my writer friend Ben dropped in to share his thoughts on strategic renewal and scheduling breaks throughout the work day. His post about doing more by doing less was a hit with many of you. Well he’s back, and he’s talking about breaks again. Big breaks. Weeks, months, even…um…a year. Read on to find out how a sabbatical may help you keep that love feeling fresh. Take it away, Ben.

My second love is soccer. I play it, I coach it and I follow it. (And for those of you who didn’t know it, Chase went to college on a soccer scholarship and loves the game too…) As a US citizen, I am a passionate supporter of the US National Team, which is currently in the middle of qualifications for the 2014 World Cup. Anyone who gives a damn about US soccer will know the name Landon Donovan. Easily one of our nation’s best players ever, Landon announced last December that he was taking a 4-month break from the sport following the title-winning Championship match for his MLS club team, the LA Galaxy.

In the middle of World Cup Qualifiers and at the top of his game, our nation’s best player decides to take a sabbatical. “What the F?” said half the US soccer nation, instantly polarized. On the one side were the haters who called the act the epitome of selfishness and narcism. On the other, less-populated side were those who got it. Dude needed a break. He’s burnt out. He’s been the poster boy of the entire sport in the States for as long as he’s been representing the country on the field. Let him surf. Or snorkel. Or learn tennis. Or whatever it is he needs to do.

I thought about this for another hot minute. My Father is a professor at a University. I learned the meaning of the word “passion” by watching him devote his life to his students and to his discipline. But I don’t remember anyone calling him “passionless” for taking a sabbatical. So given Donovan’s moves, learning from my Dad, and some conversation with Chase, I’ve asked the “when do you know you need a break?” question. This is not the definitive list, but it’s a start to some answers:

_All your work starts to look the same
_You dread getting out of bed in the morning [not just once in a while, but routinely] _You haven’t had an original, “eureka”-moment idea in weeks
_You spend a good portion of your waking day fantasizing about travel, learning a new skill or craft, or marking a bucket list item off the list
_You truthfully answer “nothing much” to the frequently-asked question “what have you been up to lately?”
_You feel like your passion for something is waning
_The things in your routine that used to be easy and fun seem hard and annoying

But don’t feel like you’re alone in these feelings or “getting soft”. History is full of amazing creatives who take time off… Up high on the list are:

Daniel Day-Lewis. Master of the Sabbatical. Photo from Wikipedia.

Daniel Day-Lewis — arguable the greatest actor of our time — routinely takes breaks for as long as 5 years between his [award-winning] roles. In fact, it’s been rumored that he is planning another 5 year break to focus on family and learning “rural skills” like stonemasonry. Director Terrence Malick famously took a 20-year sabbatical between the critically-acclaimed “Badlands” (1978) and the thought-provoking “Thin Red Line” (1998).

Alternatively, check out this TED talk below by renowned NYC designer Stefan Sagmeister, who closes his studio doors once every seven years to take a full year extended break from work.

And then there are some companies that support this…. Greeting card giant Hallmark — which employs a staff of over 700 writers, illustrators and designers — owns a 180,000 square foot “innovation facility” where staff can pursue myriad artistic endeavors, from stitching and woodworking to ceramics and leather tooling. Hallmark’s renewal program sends employees to the innovation facility for up to four months at a time to learn a new skill or craft and get a much needed break from the computer screen. The company also owns a farmhouse retreat on 172 acres, which it uses for similar employee getaway purposes. This sort of forced creative renewal keeps workers inspired and prevents burn-out and creative drought.

Not all employers are as cool as Hallmark. And we’re not all university professors who get a year off every 7. Some of you are wondering how you can afford to take extended time off from your work. If you are currently ‘stuck’ in a corporate job and looking for a way to take a strategic job pause without losing your job, take a look at YourSabbatical.com. The company helps employees put together convincing proposals to negotiate a career break with the bosses. If you’re short on ideas for ways to spend your sabbatical, the site put together a top 100 list. Some of the gems include:

The company draws an important distinction between a vacation and a sabbatical. The former, for example, is often not goal-oriented and pays little mind to enhancing one’s life or career. The sabbatical, on the other hand, is designed to restore creative juices, enable the attainment of personal goals and achieve greater career success.

It’s a daunting step to take. Unknowns and what-ifs abound. Great security probably lays with the status quo. But status quo is creeping death to the creative. So take a moment and ask yourself if you’re creative side would benefit from a planned sabbatical. Then start planning.