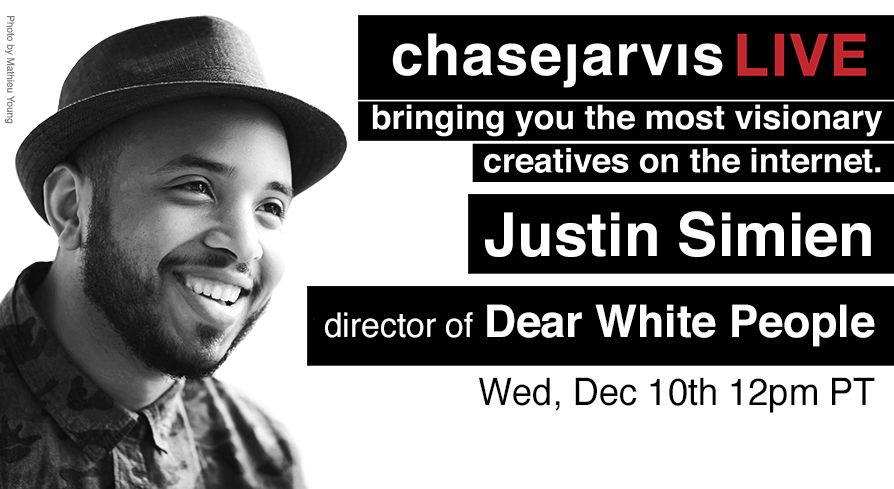 UPDATE: In case you missed it, here’s the re-watch of the incredible episode with Justin Simien, below!

It’s my hope that after watching this you…
…are now more inclined to take on a huge creative challenge
…can use Justin’s approach and techniques to overome hearing “no” in pursuit of your dreams.
…have a better sense for the “new” democratized way that films can get made..
…have a better understanding of how to recognize and respond to systematic racism.
…have now experienced another visionary and inspiring creative.

These are just some things that I took away… Surely I missed a bunch that are worth a shout out, of course feel free to let me know!
__

REMINDER: this show is TODAY Wed, Dec 10, at NOON San Francisco time (3pm NYC, 20:00 London) and is broadcast LIVE at http://www.chasejarvis.com/live. Tune in, join the global internet audience + live Q&A w/ Justin Simien. PLUS – I’m giving away a camera today too! Details below – see you soon.

Years ago as an up & coming photographer, I got so damn sick of hearing NO, sick of hearing what I had to BE and what my work had to LOOK LIKE in order to “make it”. Now years later and after some modest success, I…actually, wait, who am I kidding…that banter from the world never really stops, regardless of success or achievement. So the question I started asking myself some time ago WASN’T “how can I avoid those toxic ideas” – but rather “how can I use those toxic ideas, the uncertainty they create, or even my own identity crisis as fuel for my biggest goals + aspirations?” How can I beat the system?

ENTER: Film director, writer, and the artist that everyone in Hollywood/the film scene is talking about right now…my newest hero, Justin Simien. More than anyone I know personally, Justin has centered his emerging career around overcoming the “you can’t do this / make this / be this” and around telling stories about the human condition–HIS condition. And he’s parlayed those efforts from a successful IndieGoGo campaign, to nabbing the Special Jury Award at Sundance, and now a nationwide theatrical release of his amazing (and controversial film) Dear White People — that is IN THEATERS RIGHT NOW (ah-ma-zing trailer below…)

Among a several other challenges –like identity, race, AND financing his dream– Justin was told his script couldn’t become a feature length film…and that commercial success “wasn’t possible” with “that kind of script”. But who’s laughing now? Justin is… he’s laughing all the way to award parties, the late night TV circuit, Variety Magazine’s Top 10 Directors to watch, and…to my couch for the next episode of #chasejarvisLIVE!

WHO: You, me, breakout filmmaker Justin Simien + a worldwide gathering of creative people
WHAT: Interview, discussion + a worldwide Q&A
WHEN: Wednesday, December 10th, 12:00noon San Francisco time (3:00pm NYC time or 20:00 London)
WHERE: Tune into www.chasejarvis.com/live. It’s free — anyone can watch and we’ll be taking YOUR questions via Facebook and Twitter, hashtag #cjLIVE

A FEW KEY CONCEPTS WE’LL COVER ON THE SHOW
// How to use NO as fuel for your creative fire.
// How to crowdsource your projects from obscurity into success
// How to break free from the assumptions of others and claim your own identity
// The power of flipping the script and walking face-first into what people expect from you
// How to make conversation an integral part of your craft
// How to use your very own life experiences as the biggest accelerant to your art & career

WITH THAT IN MIND….HELP US REPRESENT THE SHOW AND WIN STUFF.
FIRST, in order to reach the largest audience possible, we’re kicking out a couple nice prizes. We’re giving away $200 worth of free CreativeLive course credits to two (2) people. Enter to win by sending out a creative tweet OR Facebook post including #cjLIVE + any url pointing to THIS blog post. Sample for cut + paste…

Promoting the show as many times as you can starting RIGHT NOW till the show starts on Dec 10. Winners announced LIVE on the show! Be sure to use the hashtag and/or point back to my Facebook so we can track all your entries.

THIRD – JOIN US LIVE IN THE SF STUDIO FOR FILMING!!
Want to be part of the live in-studio audience? filming here at CreativeLive Studios in San Francisco?? Space is limited, BUT if you’re in the first 40 people, to submit THIS FORM we will email you back within 48 hours with instructions for YOU + 1 GUEST to come hang with Justin and me in person, take some photos, ask your questions, and generally have a ridiculously good time.

LASTLY BUT NOT LEASTLY… our fine friends at BorrowLenses.com –the place where I get all the rental cameras, lenses and equipment for my shoots — have kindly agreed to give all #cjLIVE fans 10% off this month. Use code “CHASE” now till yearend. Enjoy!

SEE YOU LIVE ON THE INTERNETS OR IN PERSON ON DECEMBER 10TH!!