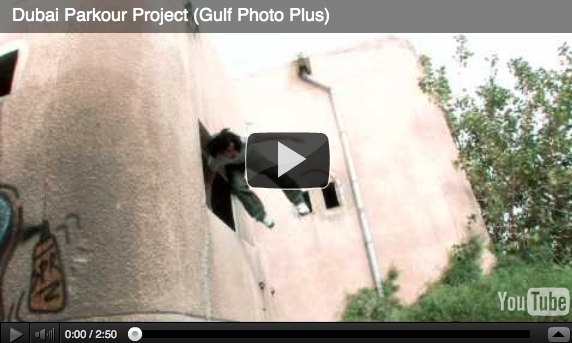 What kinda magic can 22 photographers from 16 countries do in 12 hours in Dubai? Well if they can round up 6 traceurs, 1 beautiful woman, 1 Mountain Dew, and a Porsche Cayenne, they can create something pretty darn cool.

Here’s how it went down: we all gathered as a part of Gulf Photo Plus, an annual photo festivus in Dubai UAE of more than 1000 photographers from around the world. Just so happened that I was teaching a hardcore little seminar called Prep. Shoot. Wrap! for a range of photographers–some intermediates and some young pros. I also roped in Kate, Scott, Cody, and Adam the Intern from my crew for help. The seminar, now in its second annual iteration, basically sets out to simulate an actual commercial production. And this is the real deal, complete with scouting, casting, shooting, production, post production the whole enchilada…

But rapping about the main event is not the purpose of this quick post.

This post is about a fun new supplement to that mock print campaign we added this year aimed at collaboration and at addressing the convergence of photo and video–an important part of the changing landscape of professional scene. This go-round the students were also required to create assets for a collaborative group video project uniting those two media – all in one day.

This above video is the result of the class’ efforts. I hope you think it’s as cool as we do…in a group learning sort of way… It’s quick and dirty, not taking ourselves too seriously here…but really loving the concept of a bunch of photogs creating assets for one group project on the fly.

For a few of the details on how we pulled this together, plus some gear lists and shout outs, hit the continue reading link below.
—

To say the class “wrote” a script for this piece would be a huge stretch. A more accurate description would be to say we took 30 minutes, gathered around a white board and scribbled down a basic storyline and a mechanism for how we could possible make such a task feasible. That was step one. We considered how best to capture, review and edit a huge body of work in a really short time period. And here’s what we came up with:

Prep: First, the students agreed as a group that in order to facilitate the story we would together shoot a 20 second intro that set the scene, and a 20 second conclusion that wrapped the story. We shot both these from a bunch of different cameras and a buncha different angles with almost everybody gunning – and all the models on one set – lots of different looks. This turned out to be a crucial step in pulling this together. The rest of the random sequences would be pulled together to make the meat of the video.

Shoot: On the shoot day, the class of 18 divided into six groups of three, each with their own local Dubai parkour athlete–or traceur to use the parlance of the sport. Each group shot with a different athlete in each of three locations across the city. The intro and end of the video was shot in a group setting and then each group went their own way at each location. We moved from each location as a big group but made sure to select locations that were large enough that the athletes would be able to get their sport on and the photographers wouldn’t be trampling all over one another to get their shots. This also proved key. It was amazing to see so many of the same moves shot from a number of angles with different cameras… An uber low rent “bullet-cam” in some cases. Loved it.

Wrap: Once the shooting was complete–12 hours in total–the photographers each edited down to their favorite 10 video clips and/or 10 still sequences with up to 20 frames each, and provided us with their RAW files. From there, my brave crew took over. It was a heck of a task pulling together all the different footage, but Scott and Cody locked themselves in hotel room in front of a burly Mac Pro, surveyed those images, processed them all into tiffs and .mov files, and laid this sucker together as best they could in 24 hours. Intro at the front, closer at the end, and all those sequences in the middle.

Ultimately, everything went according to plan. The students worked hard together in the trenches, learned and laughed. I’m not sure something like this has happened before where a disparate group of photographers and videographers from a variety of backgrounds with entirely different experience and expertise levels have come together–on such a short timeline and around a sport that few of them had ever heard of–to take part in a collaborative learning experience that created something as unique and as relatively cohesive as this. And that is cool. It’s certainly not perfect, and there is plenty of opportunity for growth and polish, but damn this was fun.

The Take Away: Given the nature of photography meetups happening around the world fostered by you, me, and numerous others in this community, here’s a little call to action: I’d love to see this sort of thing catch on in your world. Let this be a little starting block. Occasionally, instead of getting together to simply learn about photography and shoot photos together, hows about you get together with some buddies, add a layer of complexity, and make something like this? Or way better. We did this in one day. What could you do in a week with your friends? You don’t need a seminar with an instructor, and you don’t need a bunch of fancy equipment. Get 10 of you shooting together toward some final project that we can all sit back and drink in. It would be great to see these things popping up on the web – a collaborative piece that reflects a bunch of different viewpoints and a creative synergies all bound up into one piece.

My hat is off to this hardworking bunch of students. We had a blast making this, and I think you would too. Share the idea with your friends.

Big ups to The Saturday Knights for providing the perfect music for this piece. Please support them and buy their music here on iTunes.

Still cameras used:
_about 15 or 20 makes and models from consumer dSLR to top of the line pro rigs…

And to my crew:
_kate
_scott
_cody
_adam

[if your RSS feeder or email didn’t pull in the video, click here to see it.]

Me, Myself and I – Francois Brunelle and his Doppelgänger Project [Find Your Look Alike]
4 Photo Technologies You Need to Know

A New Project: Songs For Eating And Drinking

Why Creativity Is The Key To Leadership w/ Sen. Cory Booker