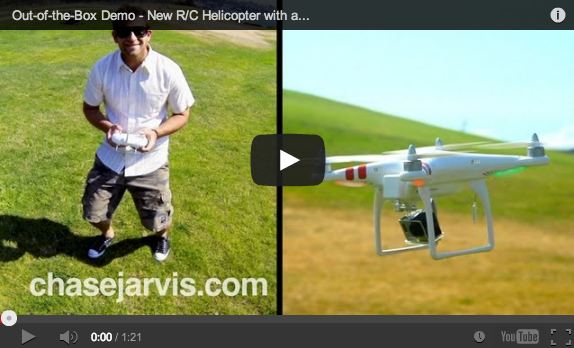 Because there are few establishing shots that can compete with the one you get above 250 feet, I frequently take my shoots airborne. Whether it’s yanking the doors off a Bell Ranger traditional style or the…ahem…new school way of sending an 8-bladed octo-copter to do the dirty work, if it’s outdoors these days, aerial footage is, well, the new black.

Neither option mentioned above is cheap, however. I’ve been paying thru the mega-schnoz to rent A-Stars ($2000 + per hour) and such for years. And then was superduper excited in 2010 to go remote aerial at about half the cost of a real heli for this project launching the Nikon D7000 (here’s some more BTS with the same flight crew from a commercial i shot in Telluride…). But it’s still pricey. $2k – $5,000 per DAY or more. And although going the R/C route is the lesser of two budget busters, it’s still a rough lump to swallow, particularly if you’re just getting in the game.

ENTER the DJI Phantom, (picked mine up at Dronefly.com) the out-of-the-box R/C quadcopter.

Now before y’all jump into a tizzy that this thing isn’t close to the same quality – doesn’t do X and Y…I know those things. It’s ok that it can’t fly an Arri Alexa or do this or that other thing. BUT damn this is a great entry product that A) allows budget conscious folks the ability to fly a camera; B) makes some pretty solid footy for web videos and such; and C) is a helluva lot of fun to fly. All at fraction of the cost of any previously mentioned option.

Designed to fly the GoPro (you know I love ’em in this video), this little rig comes in at under $700. Nothing to sneeze at, but chump change compared to what was available just 5 years ago. My crew has two of these little buggers now — and within 5 minutes I had achieved a comfort level great enough to try the stunt at 0:45, terrorize the other people at the GasWorks park in Seattle, and even chase a seaplane.

Although it’s not suitable for high end work (yet?), this is a nice budget breakthru. And truth be told it’s a fricking blast — I’ll be doing more soon. Perhaps…ahem… even on my next photo shoot in Iceland…