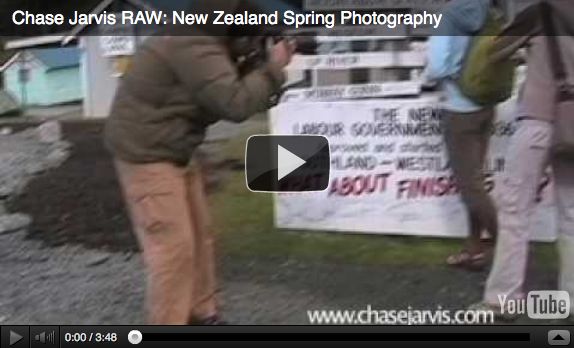 Crazy camera angles, helicopter logistics, truckloads of gear, 15,000 miles and a crew of more than 30 people… As the saying goes, it takes a village.

Hopefully you’re familiar with my ongoing video series entitled Chase Jarvis RAW, where I attempt to highlight the underbelly of commercial photography and how much effort goes into creating the images you see in advertisements, magazines, brochures and online. In this latest video, Chase Jarvis RAW: New Zealand Spring, I’ve aimed to reveal the logistics of a decent size commercial shoot, and specifically how many great people and how much hard work goes into making just a handful of great pictures. If you’re a curious or aspiring photographer, an established pro who wants to see how another photographer operates, or just intrigued by what goes on behind the scenes, then this “raw” video might be for you. If, on the other hand, you’re a prima-donna photographer whose not giving plenty of credit to the hard-working crew that helps make your photos happen, then don’t watch this, because I’m calling you out.

If you dig this piece from New Zealand, then check out another recent video clip from the Chase Jarvis RAW concept, called Chase Jarvis RAW: Ninjas. In that episode, we highlighted the making of some really unique and creative images with no end client in mind, but rather specifically for my portfolio. It featured stunt men, hot and scantily-clad stunt women, smoke machines, weapons, trampolines and a run-down warehouse.

[And lastly, in case you missed it, don’t forget Chase Jarvis RAW’s kissing cousin, Chase Jarvis FRAMES, where we link every image (thousands) from a multi day shoot–the good ones and the junk–together in a sequence that reveals all the blown angles, misfired flashes, the great frames, the junk, the outtakes and more. The most recent clip from this concept is Chase Jarvis FRAMES: Hasselblad Masters.]

Depending on your reader, RSS users can find the video here. If you want to receive this blog in your inbox, enter your email in the upper right corner here, or to subscribe via RSS, do so here.