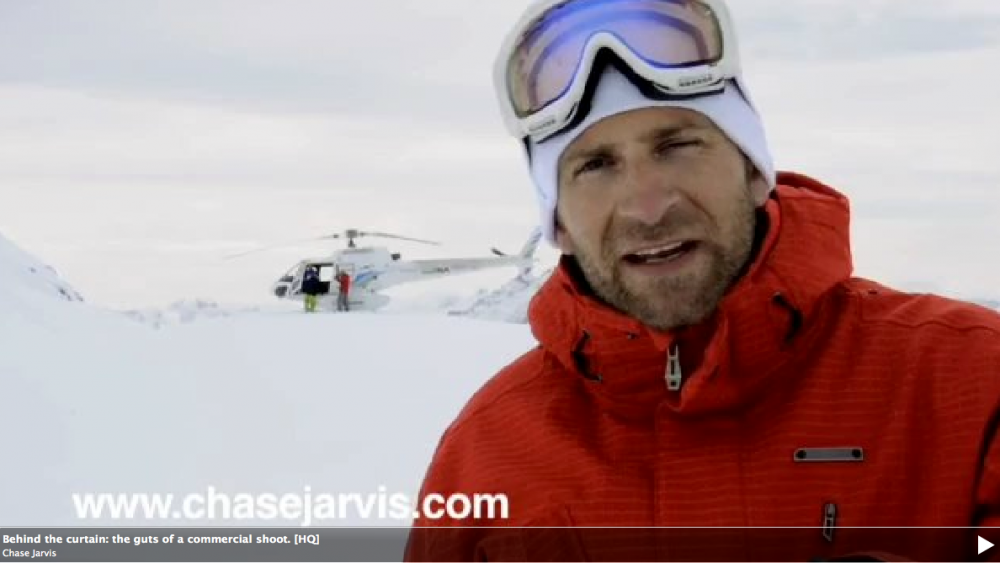 Behind The Curtain: The Guts Of A Commercial Shoot

Whew. If you’ve tuned in at all in the past few days, you’re aware of what I’ve got cooking. To my knowledge this is one of the first (perhaps THE first?) global, multi-week-long, play-by-play commercial shoot to have its behind-the-scenes life chronicled and broadcast almost in real time via blog, Facebook, and Twitter. This will be the deepest look into the black box of photography that I’ve been able to share to date. By a country mile.

So two things coming at ya here in this post. One, the overview of what I’m doing. Two, the why I think its cool.

First, the overview:
1. I’m working on the south island of New Zealand–and it’s winter down here in the southern hemisphere.

2. The campaign I’m shooting is for SanDisk, the company that invented flash memory and is the maker of most of our industry’s memory cards.

3. The subject matter is skiing and snowboarding. Some helicopter access, some terrain park, some half pipe.

4. The athletes I’m working with are some of the best in the world. Guys like X-Games gold medalists Simon Dumont and TJ Schiller. Epic.

5. My contractual deliverables for the project are quite specific, but you know me – I’m shooting a ton of formats. Everything from the Nikons and the Hassie’s to video to the iPhone, so you’ll see all sorts.

6. Since daylight is short in winter, since there are often weather holds, and since we’re here for a couple weeks, I’m really making an effort to paint the largest picture possible. I’ll dive into the creative process, art direction, interviews with the crew and talent, a little gear talk, hell, even production details that normally give me the willies to think about.

7. As I said in my quick intro vid a couple days ago- the content I’ll push your way will be largely unpolished. It’s a choice I’ve been forced to make between putting out polished behind the scenes stuff or putting out volumes of behind the scenes stuff. I chose the latter based on feedback from lots of you from this community. The video you see above is the most polished thing I’ll put out. And we only had the chance to do that because today was day 1 of shooting and the weather crapped out on us.

8. There may be things you think are sucky or boring. But everything I’ll post will be relevant to questions I’ve received or things I’m passionate about. It won’t be candy coated, but I tend to have an overtly positive attitude, sometimes to a fault. I won’t brood or linger when stuff goes sideways, but content will run the gamut of our experiences here in the trenches.

9. I want this to be as interactive as possible. For it to be a collective success, please send in your questions, comments, ideas. I’ll do my best.

So that’s the what I’m doing. The why I think this sort of thing is cool is after the jump… [Click the ‘continue reading’ link below…]

Now the why I think this is cool. Generally I think it’s cool because it represents a shift in several things:

1. The technology to be able to do this wasn’t ripe until just recently. Now, that technology is right at our fingertips. Let’s use it.

2. Taking on such an endeavor is a substantial workload add-on to the normal campaign effort – which tends to be all encompassing as it is. Posting images, videos and words while on breaks and/or in the evening after really long days can be rough when you’re so deeply immersed in the primary task at had – making great pictures for a client who is paying real bucks. My crew is so effing hard working and wants to do more for the community; and SanDisk actually gets it – that sharing is cool. Those two things are sorta game changers.

3. Today almost everything in high-end advertising still lives under the tightest of wraps until well after the campaign has come out – or even longer – like forever. No one gets to share, disclose, or discuss much of anything, really. Historically speaking–for a myriad of reasons, some legit, others flimsy, spurious, and unjustly fear based–nobody wanted to be first in shedding light on the gritty details of how stuff really got done…the “making of the sausage” if you will. Regardless of the industry. But this–and other things like it–are signs that times are changing. Sure 90% of the commercial work that we pros do is still kept under wraps. And of the 10% that’s even remotely “transparent”, there are still many elements of those gigs that are kept under strict confidence and non-disclosure. But I love that its all evolving.

Lastly, like a woodworker loves a mortise and tenon joint, or a biochemist loves the cells in a rat’s liver, I love what I do, in case you can’t tell… and I hope you enjoy following along.