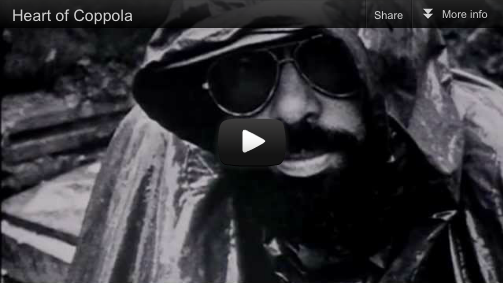 In honor of the 33rd anniversary of Apocalypse Now, film editor Brian Caroll put this mash up together. It’s a gem. Makes me want to go back and watch the movie and the epic documentary Hearts of Darkness around the making of the famously plagued and problematic – but ultimately brilliant film.

Coppola’s quotes, especially the one that Caroll ends the tribute with, are gold. Here are a few of my favorites:

“Nothing is so terrible as a pretentious movie. A movie that aspires for something really terrific and doesn’t pull it off is shit. Its scum. [That’s the] filmmaker’s greatest horror. Is to be pretentious.”

“The great hope is that people who wouldn’t normally make films will be making them. Suddenly, one day some little fat girl in Ohio is going to be the new Mozart and make a beautiful film with her father’s camera and for once the so called professionalism about movies will be destroyed forever – and it will really become an art form.”